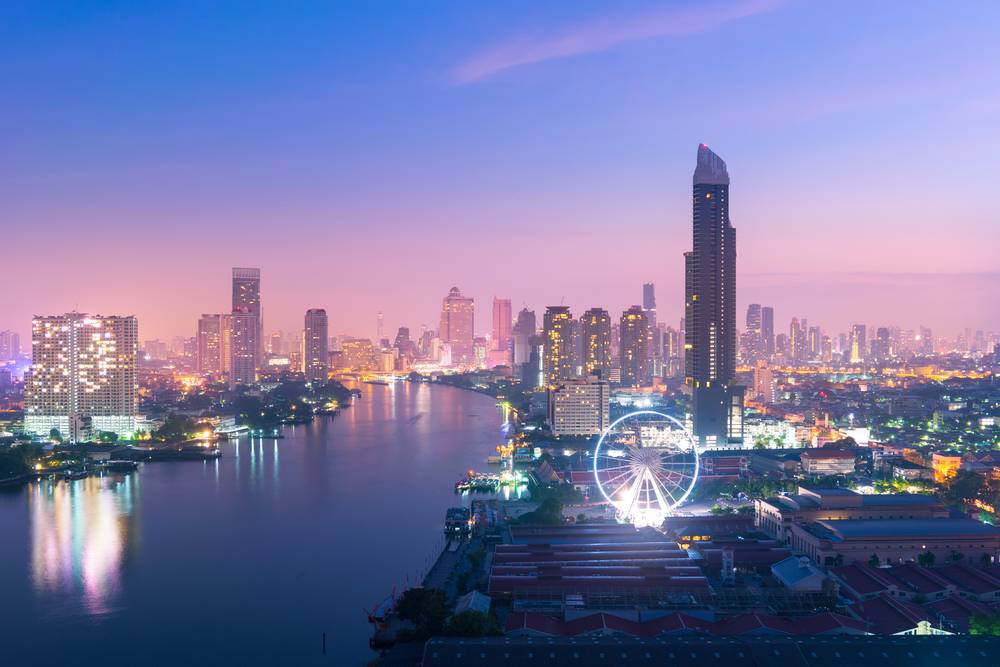 What used to be an old factory beside Klong San Pier was morphed into a café, homeware store, gallery, bookshop, office, event space, dining destination and overall ‘cool’ space back in 2015 by Duangrit Bunnag, a renowned local architect and visionary. The whole sprawling complex has large glass walls, iron framing and exposed brick, giving it a chic industrial feel. The gallery hosts group exhibitions by young artists and designers, while live gigs are often held in the spacious outdoor area. Indeed, The Jam Factory is one of the founding members of the local Charoenkrung Creative District. Sitting outside the main restaurant on the desk with a cold beer watching barges slink down the river is a great way to pass away a lazy afternoon.

Tip: On the last weekend of each month there is a local farmers’ market on the grassy area outside, with live music, street food and lots of arts’ n’crafts on sale.

A short work up the road you’ll find Lhong 1919, the newest hipster addition to the Thonburi scene. Expertly mixing Bangkok heritage with oodles of Instagram worth photo opportunities, this fully restored 19th-century Chinese mansion is a unique local site. As you stroll around the rooms on two story’s, central courtyard and large shrine, dedicated to the Chinese goddess of seafarers (Mazu), you’ll get a real sense of how this building would have once been thanks to striking period fixtures. The three sides of the main building’s ground floor are linked with stores, selling everything from home furnishings to souvenirs, and the remaining buildings house various food outlets, from sit-down restaurants and cafes to casual food trucks.

Tip: Lhong 1919 regularly holds fun events, from music and theatre to food and fashion. Make sure you check out their social media accounts before going to know what’s likely to be on. Most travelers who visit Bangkok make a point to visit Wat Arun, aka the Temple of Dawn, and that’s why it’s one of the city’s most iconic riverside landmarks. Indeed, this five-spired temple is featured in the Tourism Authority of Thailand (TAT) log and the 10-baht coin. Briefly home to the Emerald Buddha, this circa 1768 temple envisioned by King Taksin, features a pair of yaksa (giant) statues, ceramic roofs,120 Buddha images and a 70-metre-high spire. If you can, try to view the temple at night from across the river as it makes a stunning sight when illuminated.

Tip: Don’t visit on a rushed canal tour. Access the temple via the public ferry at Tha Tien Pier and wander the temple grounds at your leisure.

Despite its commanding position on the western bank of the Chao Phraya River with its giant temple structure, Wat Kalayanamit (often shorted to just Wat Kalaya) is often overlooked by tourists and locals alike; with most people’s attention drawn away to the flashier and more well-known Wat Arun down the road. However, if you’re after a more tranquil temple experience and fancy seeing an enormous seated golden Buddha, head over here. King Rama III built the delightful temple in the first half of the nineteenth century.

Tip: This temple is where you come to pay respects to Luang Poh Tor (famous Thai monk) and pray for safe travels and good relationships. 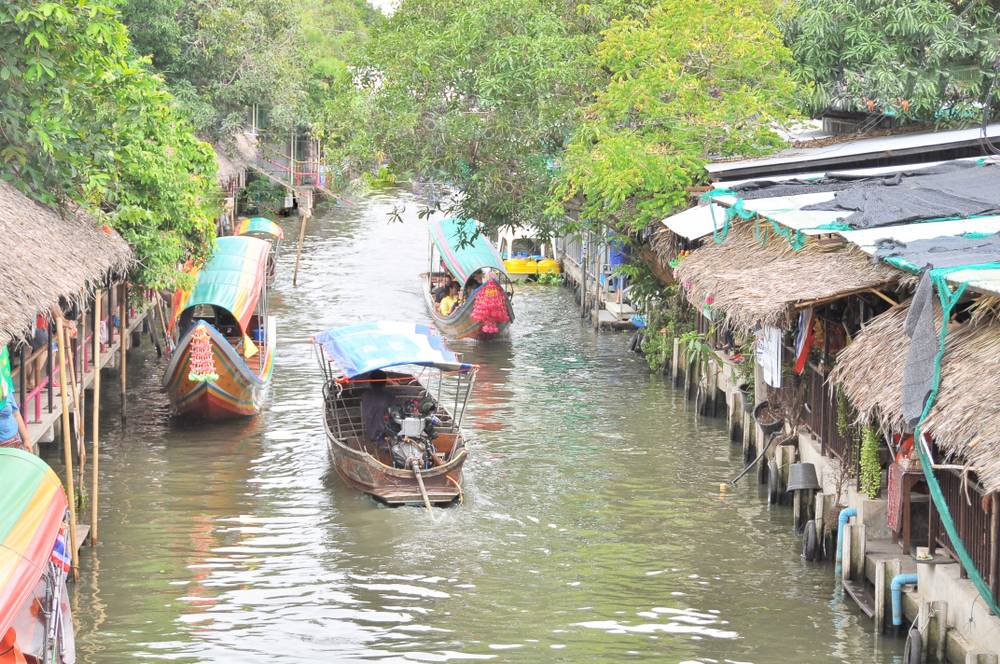 Wang Lang daily market covers a vast area on the Thonburi side of the river beside Siriraj Hospital. It starts at Wang Lang Tha (pier) and from there winds its way through a maze of alleys for 300 meters up Phran Nok Road. Most of its stalls are selling authentic street food and second-hand clothing, with the remainder selling a jumble of clothing, footwear, beauty products, toys, and brick-a-brack. It’s worth squeezing and pushing your walk through the footpaths to explore this local institution.

Tip: Regarded as having some of the best street food in Bangkok, make sure you sample the grilled meats, noodle dishes and coconut desserts.

Khlong Lat Mayom Floating Market is located less than twenty kilometres from the river and is easily accessible by taxi from Wongwian Yai (the last BTS station on the Silom Line). This market is worlds apart from touristy Damnoen Saduak and overcrowded Amphawa; it has all the charm of a truly authentic Thai market. A substantial portion of the market is given over to stalls touting dishes from across Thailand, particularly freshly grilled and steamed seafood. Besides, a few stalls are selling locally made homewares and handicrafts. Otherwise, treat yourself to a Thai massage, longtail boat ride or pottery making class.

Tip: Try to come on a weekday, it’s far less busy than the weekend. On a good day, you might even be the only foreigner here! As mentioned previously, the rampant modern development seen everywhere over the river in Bangkok has not yet reached the core of Thonburi. Its humanmade network of khlongs (canals), including Khlong Mon, Khlong Yai and Khlong Noi, retain much of their bygone charm. For a chance to escape the crowds and get a real sense of how people in Bangkok used to live, in stilted wooden teak houses and dilapidated shacks, you must take to a boat tour. A 6-metre-long narrow, flat-bottomed, longtail speedboat can easily navigate the Thonburi khlongs. You can hire one from any major tourist pier along the river, for example, Saphan Taksin Tha.

Tip: Agree on the price before departure (400 – 500 baht per hour). Just keep in mind that you get a driver, not a guide; his English may be non-existent, but he will know where to go!

If you do venture out and take a klong tour, chances are you will pass by the Artist’s House (aka Baan Silapin). The vastly different kind of tourist attraction is more than two hundred years old, dating back to when the capital of Thailand was on this side of the river. Since been restored to its former glory, the house has become a popular attraction, and the boardwalk leading up to it now hosts several shops and tiny restaurants. Inside there is a modest coffee shop and famous puppet show and display. But the real drawcard is the eclectic and eye-catching art scattered all about the premises. Look for the lifelike sculptures facing the khlong.

Tip: The traditional Thai puppet show is performed every day, except Wednesday, at 14:00. 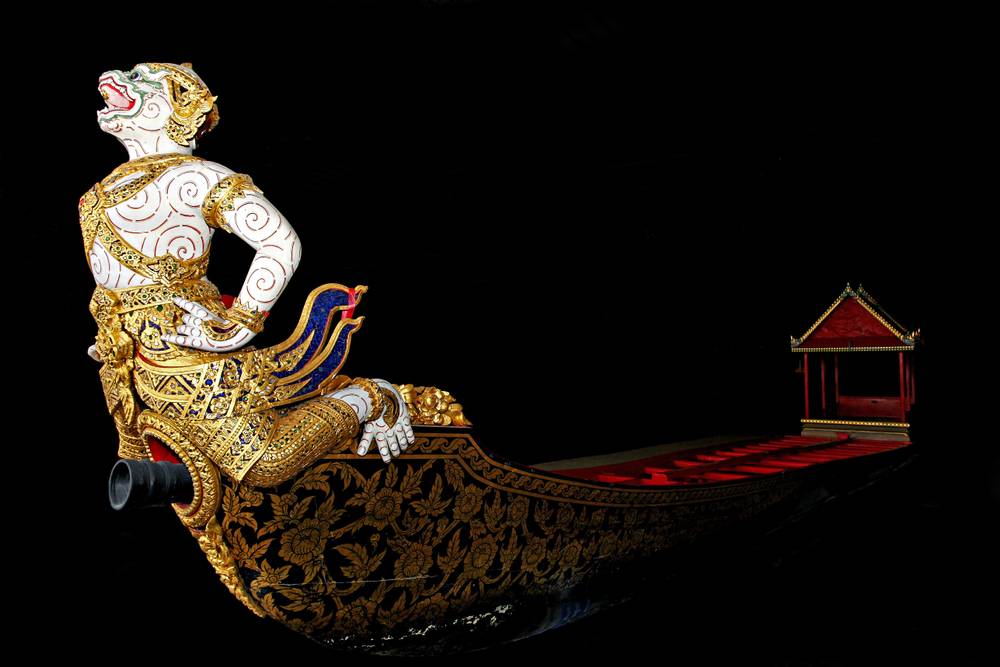 Siriraj Hospital is Thailand’s first modern medical hospital and school, founded by King Rama V in 1888. The hospital complex is home to six distinct museums (collectively known as the Museum of Death) within two separate buildings, but only three of them are of any real interest: pathology, anatomical and forensic. Combined they contain more than 2,000 specimens, including skeletons; figures of humans and animals; bodies and organs preserved in ethyl-alcohol; a complete dissected human nervous and blood systems; murder weapons and their victims; and so on. At turns gruesome and intriguing, this is one tourist attraction guaranteed to make a lasting impression.

Tip: Some of the exhibits are quite disturbing, so if you have a weak stomach, don’t visit.

Back during the Ayuthaya period, Bangkok was a water city, and the Chao Phraya River and its canals provided the primary means of communication and travel for people. For the royal family, this meant going about in unique and stunning royal barges made from teak and intricately engraved with mythical animals and gilded in gold and glass. Now, eight of these amazing barges – some as long as 46 metres and requiring 50 skilled oarsmen and 14 crew to man – are on display at the Royal Barge Museum. Nowadays, they are reserved for auspicious ceremonies and state occasions; as such, they have only taken to the water 16 times in the last 65 years.

Tip: If you’re doing a longtail khlong boat tour, this is also an excellent optional stop. 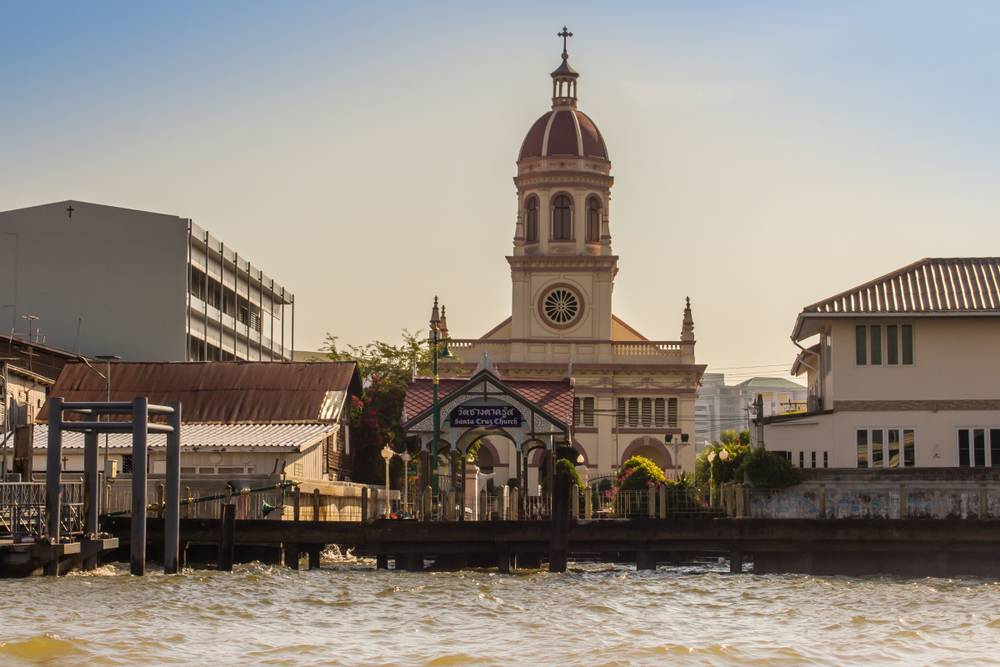 Stunning Santa Cruz Church is a legacy of Sino-Portuguese relations and dates to 1770 (although this is a 1916 re-build). This long-standing Catholic institution was originally built for the substantial cohort of Catholics who once lived on the west bank of the Chao Phraya River. The church boasts a Renaissance-neoclassical architecture with a prominent reddish dome that’s reminiscent of the Duomo in Florence and visible for miles around. As the church’s architecture has strong Chinese characteristics, locals over the centuries have nicknamed it Kudee Jeen, meaning ‘Chinese church’. If you visit the church, after enjoying its splendor, be sure also to explore the myriad winding alleyways of the charming Kudi Jeen neighborhood surrounding it.

Wander into Kudee Jeen neighborhood, and not far away you’ll find Baan Kudichin Museum, tucked at the end of the main alley in a renovated wooden house that used to belong to a Catholic family. On the upper floors, you’ll find a small museum showcasing the 250-year-long relationship between Portugal and the Kingdom of Siam and relics from the former residents. The museum also displays an extensive collection of photos and tools used by the early residents of Kudee Jeen. Before you leave, head to the snug café beside the garden for a ‘sappayak’, a traditional Portuguese bun stuffed with minced pork, potatoes, and chili.

Tip: You can also climb up to the rooftop for picturesque panoramas of the Chao Phraya River and surrounding neighborhood of low-rise wooden houses.

If you’re staying at the Ibis Riverside or any other hotel in Bangkok near the Chao Phraya River, you really must explore Thonburi and all the fantastic and unique sights on offer.